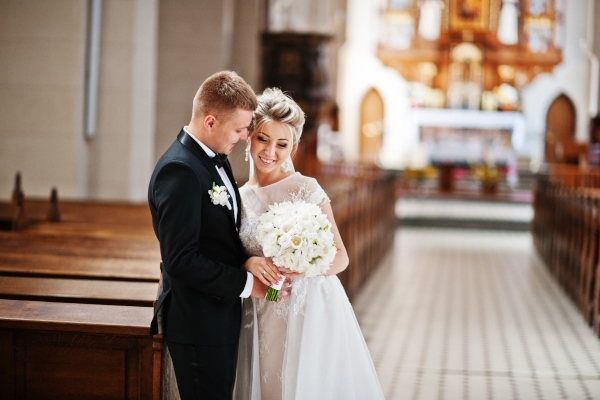 Wedding customs and traditions differ greatly from one culture to the next, with many of these customs and ceremonies stemming from the major religions of each region. Shinto marriages in Japan include the san-san-Ku-do, a purifying rite in which cups of sake are shared. To atone for transgressions, Jewish couples may fast on their wedding day (don’t worry, they can eat at the reception!). Before their wedding day, Muslim and Hindu brides adorn their bodies with beautiful henna patterns.

Even western, predominantly Christian cultures have religious wedding ceremonies. Many of these customs have become so ubiquitous that we don’t consider incorporating them into our weddings. Indeed, Christian wedding rituals have become so ubiquitous (particularly through film and television) that many other cultures have copied them; in Japan, an estimated 80% of weddings are “Western” in style, with Christian traditions.

Which Christian wedding traditions are considered traditional? Here are a few examples of religious rites.

The Bridal Dress and Veil

In a wedding ceremony, a bride wears a veil over her face as a Christian symbol.

I’ve written extensively about the history of the white bridal gown. I’ve already described how Queen Victoria originated the trend, how she chose a white gown just to highlight the lace on her gown, and how it’s not a symbol of virginity—and that it’s not a huge thing if you don’t want to wear one. However, there is some evidence that the traditional bridal attire (a white gown and veil) has some link to Christian traditions.

John the Apostle describes the bride (i.e., the Christian Church) being presented to Jesus in Revelation 19:7-8. He describes her as wearing “beautiful linen, bright and spotless,” which many interpret as wearing white. Similarly, the bridal veil has long been seen as a reference to the Temple veil—a garment that, in Biblical times, concealed the Ark of the Covenant. The veil was ripped when Christ died, symbolizing the forgiveness of sin and the people’s reunification with God. Similarly, the bridal veil is removed during the wedding ceremony to symbolize the couple’s love for one another.

Candles lit are a symbol of faith in Christ as the light of the world. The candles represent the lamps of the Bible’s five wise maidens. Because they had adequate oil, they were able to receive the bridegroom Christ when he arrived in the middle of the night.

The candles represent the couple’s spiritual readiness to receive Christ, who will bless them through his sacrament. As a result, we’ve decided to light the Unity Candle. Holyart‘s website deals on amazing and top-notch candles that can be used for this exercise. You can also get other Christian icons and works of art you can use as wedding gifts.

Symbolizes the heavenly realm; the Holy Spirit’s flow, sanctification, healing, and life-giving. The hue facilitates the connection between the heart and the uttered phrase. It appears to be a cheerful and friendly color that is loving life. It lifts our spirits at times of mental stress and exhaustion, as well as alleviates emotions of loneliness.

Loyalty, creativity, kindness, wise love, sensuality, and charity are all represented by this symbol. Moves energy gently, allowing one to discover inner understanding. Coral is an excellent hue for depression.

Consider a classic Western wedding: the groom and his groomsmen are already at the altar when the ceremony begins. This may appear insignificant—after all, the bride has an amazing gown (and spends hours on cosmetics); she should have a huge moment walking down the aisle. However, this simple custom was most likely created to match a Biblical definition of marriage.

The Bible is replete with allusions to a husband being “the head of the woman,” but the definition of Christian marriage is very plain in Ephesians 5:23-32. The Apostle Paul encourages husbands to love their spouses as Christ loved the Church and to “present her to himself as…without stain, wrinkle, or another blemish.” The bride walks down the aisle while the husband does not; she is being “presented” to him.

The Cord of Three Strands

A wedding sign with the Bible passage Ecclesiastes 4:12 saying

Now we’ll look at some more unusual Christian wedding traditions—the kind you might not see outside of a religious ceremony. These customs employ Bible verses and stories to represent a couple’s love and dedication to one another and their devotion to God.

The first tradition I’d like to discuss is the three-strand cord. This is a quote from Ecclesiastes 4:12: “Even if one is outmatched, two can defend themselves.” A three-stranded cable is not easily broken.” Like a unity candle or sand pour, this rite represents two people becoming one. However, a third party enters the picture in this ceremony: God.

Couples that include a three-strand cord in their marriage ceremony normally weave three ropes (one for each couple member and one for God) together while someone prays or sings. After the wedding, the braided ropes typically become a piece of décor in the couple’s house, reminding them of the strength and durability of their marriage.

The Joining of Right Hands

The two people would unite the bleeding palms of their right hands, as seen in the blood covenant. As their blood combined, they would exchange a pledge, eternally promising each other all of their rights and resources. When the bride and groom face each other to utter their vows, they join right hands and publicly dedicate everything they are and everything they have to a covenant relationship. They abandon their family and all others to become one with their lover

The Exchanging of Rings

While the wedding ring is an outward representation of the couple’s internal relationship, expressing the eternal essence of love with an endless circle, it represents much more in light of the blood covenant. As a seal of authority, a ring was utilized. The impression left an authoritative seal on legal papers when the ring was pushed into hot wax. As a result, by wearing a wedding ring, the couple demonstrates their obedience to God’s rule over their marriage. The couple acknowledges that God brought them together and is intimately involved in all aspects of their covenant relationship.

A ring can also symbolize money. When a couple exchanges wedding rings, it represents the union of all their resources—their wealth, possessions, talents, and emotions. Remember that under the blood covenant, the two parties exchanged belts that, when worn, create a circle. As a result, exchanging rings is yet another symbol of their covenant commitment. Similarly, God picked a rainbow that forms a circle to sign his covenant with Noah. (Gen. 9:12-16)

Foot washing is another wedding tradition you won’t see at the average Western wedding, but it is very common in more religious ceremonies. This ritual is, well, exactly what you’d expect. The couple takes turns washing each other’s feet in a water basin.

This tradition has its roots in the story of Jesus. The book of John (John 13:1-17) describes Jesus washing his disciples’ feet before he was crucified. This was a symbol of humility and devotion. Jesus told his disciples, “Now that I, your Lord and Teacher, have washed your feet, you also should wash one another’s feet.” For this reason, some Christian couples choose to recreate the ritual, symbolizing their desire to help and serve one another. 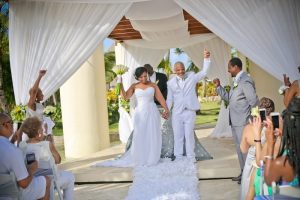 Previous post 3 Things To Consider Before Planning A Destination Wedding 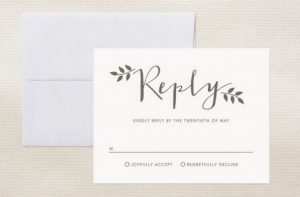 A good piece of jewelry can be made, but the amount of time and effort that goes into it is...

While some people may be under the impression that marriage is as simple as saying “I do,” the truth is...

A lovely beach wedding beneath a magnificent sunset seems like a dream, with you and the love of your life...

Creating wedding invitations that include RSVP cards can be time-consuming, but they shouldn’t be! It’s important to make sure your...

If you’ve recently become engaged, you’re likely thinking about your future wedding for a big portion of your day. In...

What to look for in an elopement photographer If you're planning on eloping, congrats! Eloping is a fabulous way to...